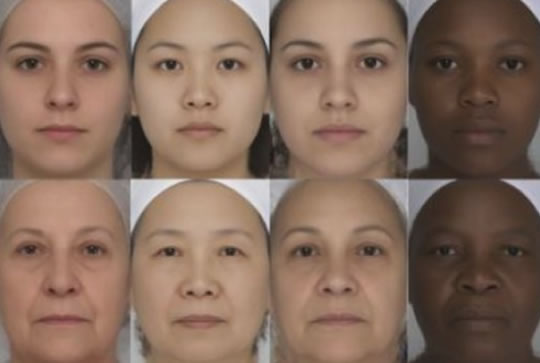 What the researchers call ‘facial contrast’, was linked to an appearance of youth, regardless of ethnic group.

Naturally, people’s facial features merge into each other with age.

“Facial contrast refers to how much the eyes, lips and eyebrows stand out in the face in terms of how light or dark they are or how colorful they are.”

This is the first study to test the effect on Caucasian women as well as those from other ethnic groups.

Women were aged between 20 and 80 years old.

The researchers showed digitally manipulated photos to people and asked them to judge who was younger.

The photo with the higher facial contrast was picked as the younger face 80% of the time.

“People of different cultures use facial contrast as a cue for perceiving age from the face, even though they are not consciously aware of it.

The results also suggest that people could actively modify how old they look, by altering how much their facial features stand out, for example by darkening or coloring their features.”

Ms Porcheron is currently the head of research at Chanel, the cosmetics manufacturer.

“Because cosmetics were shown to enhance facial contrast, this work provides some support for the notion that a universal function of cosmetics is to make female faces look younger.”

The study was published in the journal Frontiers in Psychology (Porcheron et al., 2017).