The Facial Features That Reveal Your Social Class “Over time, your face comes to permanently reflect and reveal your experiences.”

Just by looking at your face, people can reliably tell whether you are rich or poor, a new study finds.

And on that basis, they also make other judgements: for example, that rich people are more likely to be hired for a job.

“It indicates that something as subtle as the signals in your face about your social class can actually then perpetuate it.

Those first impressions can become a sort of self-fulfilling prophesy.

It’s going to influence your interactions, and the opportunities you have.”

The reason is probably that a look of happiness or satisfaction (or unhappiness and dissatisfaction) becomes etched on your face in the teens or early adulthood.

Here are some of the examples from the study, see if you can guess who is rich and who is poor.

Are the rich-looking faces on the left, marked ‘A’, or on the right, marked ‘B’? 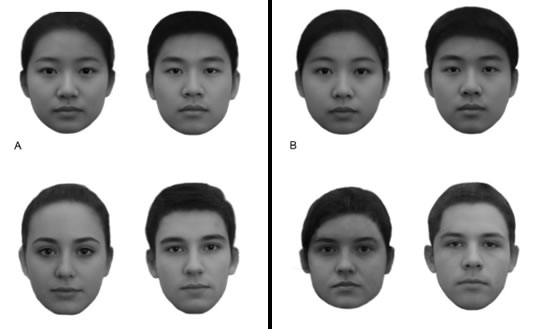 The answer is that the four rich-looking faces are on the left, marked ‘A’.

If you look closely, you will see that the difference is even more pronounced along the bottom row: the ‘B’ faces look much more unhappy than the ‘A’ faces.

“Over time, your face comes to permanently reflect and reveal your experiences.

Even when we think we’re not expressing something, relics of those emotions are still there.”

The results come from a study in which students were shown photos and asked to judge whether they were ‘rich’ or ‘poor’.

Interestingly, though, people could only judge someone’s social class if they posed with a neutral face.

The effect vanished if people smiled.

“What we’re seeing is students who are just 18-22 years old have already accumulated enough life experience that it has visibly changed and shaped their face to the point you can tell what their socio-economic standing or social class is.

There are neurons in the brain that specialize in facial recognition.

The face is the first thing you notice when you look at somebody.

We are sort of hardwired to look for face-like stimuli.

And this is something people pick up very quickly.

And they are consistent, which is what makes it statistically significant.”

“People are not really aware of what cues they are using when they make these judgments.

If you ask them why, they don’t know.

They are not aware of how they are doing this.

People talk about the cycle of poverty, and this is potentially one contributor to that.”

The study was published in the journal Journal of Personality and Social Psychology (Bjornsdottir & Rule, 2017).