10 Minutes On These Beats Caffeine For Energy And Motivation 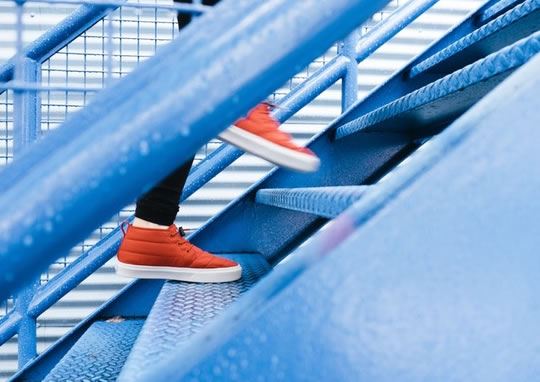 Walking up the stairs for 10 minutes beats a cup of coffee for increasing energy and motivation, new research finds.

Researchers compared the effects of 10 minutes low-to-moderate intensity exercise with a 50mg of caffeine (around a cup of coffee or can of cola) and a placebo condition.

“We found, in both the caffeine and the placebo conditions, that there was not much change in how they felt.

But with exercise they did feel more energetic and vigorous.

It was a temporary feeling, felt immediately after the exercise, but with the 50 milligrams of caffeine, we didn’t get as big an effect.”

The idea was to see if going up and down the stairs is a good option to wake up office workers in the morning.

“Office workers can go outside and walk, but weather can be less than ideal.

It has never rained on me while walking the stairs.

And a lot of people working in office buildings have access to stairs, so it’s an option to keep some fitness while taking a short break from work.”

The young women in the study were all suffering from chronic sleep deprivation.

This means getting less than 6.5 hours sleep a night.

None of the women exercised much or drank extreme amounts of caffeine (no more than 4 or 5 cups of coffee a day).

Despite the relatively sedate pace on the stairs, this condition beat the caffeine easily.

“You may not have time to go for a swim, but you might have 10 minutes to walk up and down the stairs.”

The study was published in the journal Physiology and Behavior (Randolph & O’Connor, 2017).