Sex differences in cognition are small 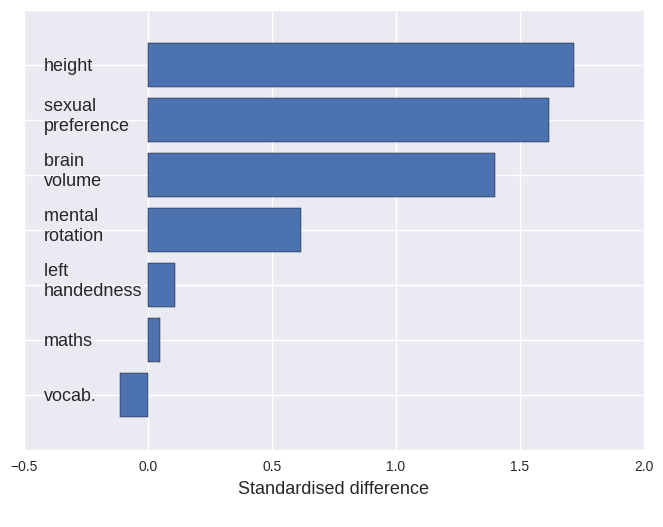 Lately I’ve been thinking about sex differences in brain and cognition. There are undeniable differences in the physical size of the brain, and different brain areas, even if there are no ‘female’ and ‘male’ brains categorically. These physical differences do not translate directly into commensurate differences in cognition. Indeed, there is support for a ‘gender similarities hypothesis’ which asserts that on most measures there is no difference between men and women.

Most, but maybe not all. There are a few areas of fundamental cognitive ability where gender differences seem to persist – mental rotation, vocabulary and maybe maths. But these differences are small. To see how small, I put them on the same chart with the physical differences and a few other behavioral differences for perspective.

References and calculations at the end of this post, below the fold. And if you need a primer on what is meant by standardised difference then go here.

Even with these, small, observed differences in cognition, we don’t know what proportion is due to contingent facts, such as the different experience and expectations men and women encounter in their lifetimes, and what proportion is immutable consequence of genetic difference in sex.

For more, so much more, on this, see the special issue of Journal of Neuroscience Research (January/February 2017) on An Issue Whose Time Has Come: Sex/Gender Influences on Nervous System Function.

Includes: Grabowska, A. (2017). Sex on the brain: Are gender‐dependent structural and functional differences associated with behavior?. Journal of Neuroscience Research, 95(1-2), 200-212.

Height: Cohen’s d = 1.72. Taken from Wikipedia page on Effect Sizes (if anyone has the proper reference, let me know)

Sexual preference: d = 1.62. First, assume sexual preference and gender are binary. Although these assumptions are incorrect and harmful to individuals, in terms of effect size all this does it contribute to an overestimation of any sex difference. Next, calculate odds that someone has a sexual preference for men if they are a women vs are a man. Estimates of non-hetrosexual preference vary from 2%-10% (here’s some discussion). This gives odds ratio of 39 (for 2% non-hetrosexuality), 19 (for 5%) or 9 (for 10%). Convert to Cohen’s d using using d = log(OR)/1.81, as per Chinn, S. (2000). A simple method for converting an odds ratio to effect size for use in meta-analysis. Statistics in medicine, 19(22), 3127-3131.

Mental rotation: d = 0.62. See Hyde, J. S. (2016). Sex and cognition: gender and cognitive functions. Current opinion in neurobiology, 38, 53-56. May be an overestimate, but is generally reported to be the largest, and most robust, sex difference in cognition.